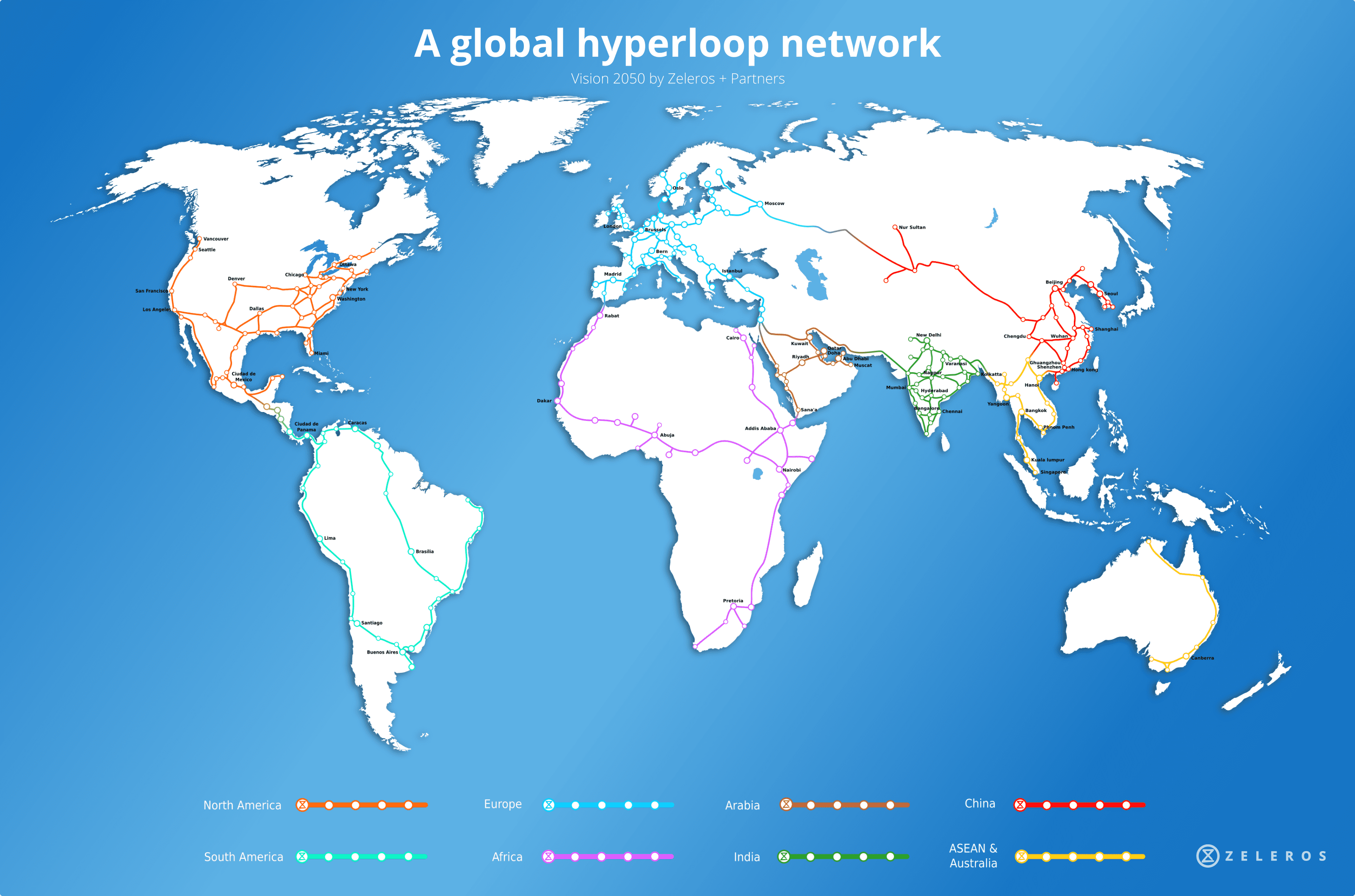 Imagine travelling to Paris for work and coming back to visit your family in Barcelona in about an hour. Getting that prime delivery just in time for your partner’s birthday in Shanghai all the way from that Shenzhen’s factory in minutes? What about avoiding the soul-destroying traffic from Los Angeles to San Francisco with an ultra-fast connection in less than an hour? These are just a few examples of the potential of hyperloop globally.

Zeleros Hyperloop, the European hyperloop company, has just announced its vision for a global hyperloop network. The company starts a new and important phase to kickstart their global operations to co-develop with Governments all around the world and industrial partners the basis for the international hyperloop corridors that will make history of transportation.

The document, which can be downloaded at Zeleros website, is the first one to provide a holistic vision of the world connected by hyperloop, with an in-depth analysis of different regions, including Europe, China, India, Arabia, Australia & ASEAN and North America. Each study highlights the impact that hyperloop routes could have in the global economies and in the efforts of the Governments to reduce greenhouse gas emissions. International experts from leading organisations like MIT (USA), Southwest Jiaotong University SWJTU (China), Roadis, Acciona and Typsa, supported the creation of this unique document highlighting the potential that these routes could have in their regions.

And the results are exciting, showcasing a promising future for hyperloop in the coming decades. Just as an example, the proposed network in Europe covering the main European capitals (Lisbon, Madrid, Paris, Rome, Brussels, Amsterdam, Berlin, Copenhaguen, Stockholm, among others)  could transport more than 310 million passengers and 5.5 million tonnes of freight a year, saving 1320 million tons of C02 avoided during its lifetime with a 57 billion euro revenue opportunity.

Commenting on the announcement, David Pistoni, Chief Executive Officer at Zeleros, said: “We aim that this document becomes a reference in urban planning for the decades to come. Hyperloop is growing fast and at Zeleros we are confident it has the potential to become the best alternative to efficiently cover routes between 400 and 1,500 kilometers in distance. With Zeleros approach, we can make the system scalable, reducing the overall infrastructure costs and the operation at safer pressures for passengers, with  a clear certification path and 2030 as the horizon to start implementation of routes”.

“We encourage innovators, governments and society to read this document and to discover with Zeleros how hyperloop can improve the way we move and the world we live in”, adds Luis Navarro, COO of Zeleros and responsible for the study.

This technology will be a crucial tool to strengthen the achievement of the UN Sustainable Development Goals as well as the European Green Deal. Since its creation, Zeleros has been promoting the standardization and regulation of hyperloop systems to ensure the highest level of safety and interoperability to expand the limits of the Trans-European Transport Network (TEN-T) and the global routes.

Recently, Zeleros closed a new investment round with world-class leaders such as ACCIONA,  CAF Group and EIT InnoEnergy. The support of these organizations definitely accelerates the deployment of hyperloop routes around the world, providing intercity, sustainable and scalable mobility at unprecedented speeds. The total financing raised by Zeleros to make hyperloop a reality into the next decade amounts to more than 10 million.

Furthermore, Zeleros’  six-meter-long hyperloop vehicle was presented last March in the City of Arts and Sciences in Valencia with the presence of institutional representatives such as Spain’s Minister of Science and Innovation, Mr. Pedro Duque. Zeleros’ vehicle traveled during the summer all the way to Dubai to be exhibited at the Spain Pavilion at Expo 2020, which just opened its doors last Friday. For six months -until 31st March 2022- visitors will be able to learn about this new technology and have the chance to experience what it’s like travelling inside Zeleros’ hyperloop system.